There are rumours going about that Zecol who own Gorilla and Trof are to open up somewhere in Chorlton. So I thought it was about time I reviewed Gorilla, to see the sort of thing we may get should the rumours prove to be true. We went very early evening when it was still pretty quiet. It's situated in the old Green Room venue under the arches on Whitworth street. 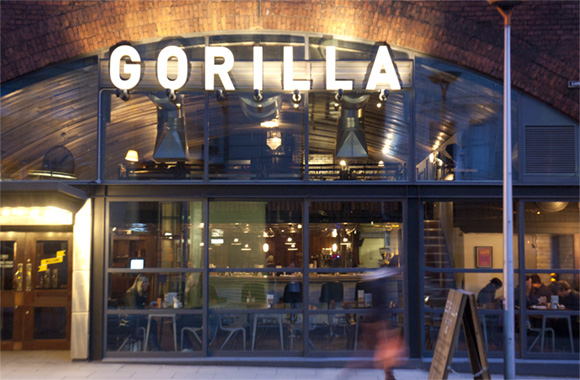 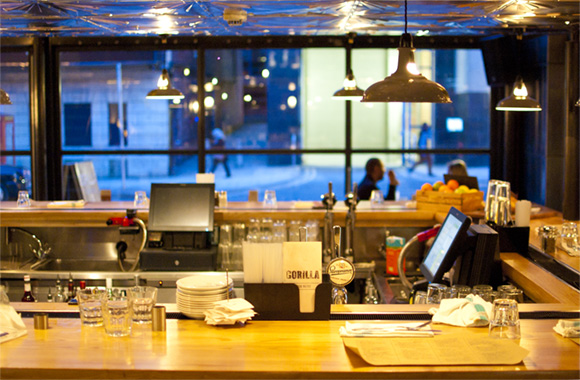 I asked if they were ok with me taking photos for this website. "No problem, as long as you don't slag us off!" They said. I would always try and be constructive in any criticism anyway, but in this case there is literately nothing to criticise, we loved everything about Gorilla. We bagged one of the booths, and had a look at the menus, even though as usual we had already decided days ago. I was looking forward to the Bread & Dripping (£3) I'd enjoyed first at Aumbry and then at The Beagle. I've decided, it's my new favourite starter. So how could it be bettered? By adding a side of Smoked Bratwurst Chippolatas (£3.50) that's how.

The waiter came over, "Sorry we've ran out of dripping." Gutted.  He came back "Chef said he'd make you some especially." Fantastic. Then he returned again, "Sorry we've just sold our last chippolatas, but we'll make you some sausages and cut them up." Again, great service. Both the fellas that served us all night, were excellent, with friendly easy going charm, exactly what you need for somewhere you might call 'causal dining'. The starter was massive, a proper good portion. I must mention the Sourdough Bread (£2.50) There was loads of it (I hate stingy portion sizes) and made by their own baker (off the premises in their other venue The Salutation.)
It was lovely, with a nice crispy crust, perfect for dipping into the golden meaty liquid. I could immediately tell the quality sausages were from Frosts, as I've eaten them before. We asked for a bag for the extra bread to take home, as wasting good food is abhorrent to us (they gave us a nicely branded cardboard box.)

We had to save ourselves for the burgers. (I'd have loved to have saved the dripping as well, but could just imagine it spilling all over the car and having meaty smells emitting for the next year.) I ordered a pint of Samual Adams to prepare me. I've not been that impressed by this beer in bottles, but on draft it was a perfect accompaniment for the food.
The burgers arrived on a wooden board, with cute little cups of fries, one standard and one we upgraded to 'Deluxe': seasoned with Parmesan & Truffle oil (£3.50)
These 'posh' fries are everywhere now, apparently Jamie's Italian do them (not been, and not likely to, as there have been to many bad reports.) I also recently had them in The Wizard, but they were the smallest portion ever. Here the portion was generous, and they hadn't been too stingy with the parmesan and truffle oil either. 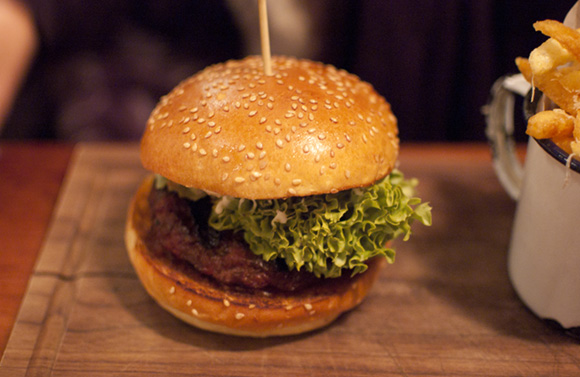 The BURGER (Toasted sesame brioche bun, pickles, butterhead lettuce, Trof recipe burger sauce, aged cheddar -  £8.50) was equally as good. The Stilton we added as an extra (£1) was well worth it as it adds that tang. The standard fries were perfect, light crispy and loads of little crunchy bits at the bottom. 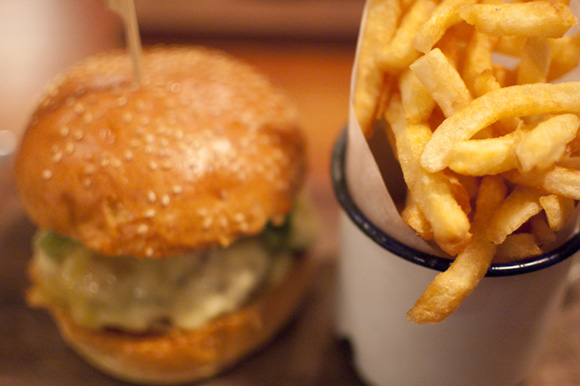 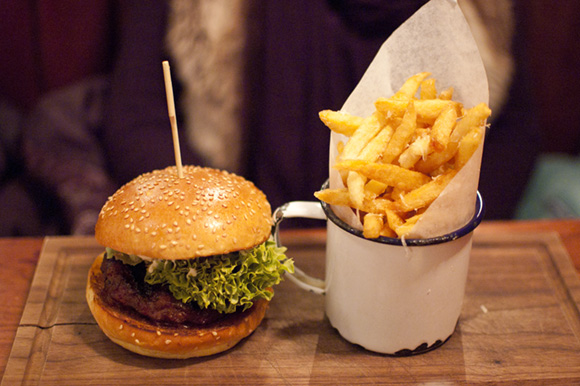 The only problem was, our planned trip to The Cornerhouse to see Django Unchained would now have to be postponed. We were too full, and couldn't be bothered waiting for another hour and a half. We dithered about getting the New York Style Cheesecake, as everybody knows dessert is a different stomach, but we finally decided on being 'good'.
Gorilla is one of those places where you can linger if you like and have a cocktail or two, or do like we did; go, eat and f*** off home. Which is what we decided to do. 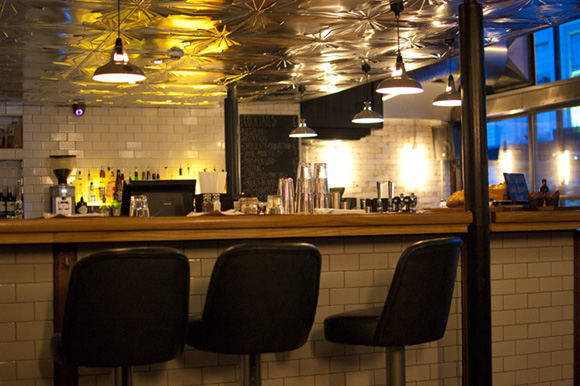 The bill came to £33.70 for 2 which was also good value. I'm sure I paid about £70 odd pound for a meal at Solita in the Northern Quarter? Both get their meat from where else Frosts in Chorlton, as does Almost Famous.
Gorilla is yet another great place to get a quality burger in Manchester, and they've got the casual dining off to a tee. 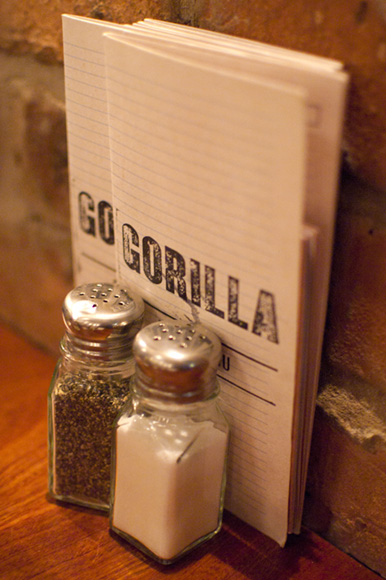 I asked Mrs Bacon for her scores on the doors. "I'm going to have to give it an 8." There was nothing we could think of criticising at all. She thought that it could have been 'a bit warmer'. True, but she is proper nesh, and it was about minus 3 outside.
I asked the waiter if the rumours of a Chorlton opening were true, and he said he didn't think they were, as he hadn't heard it from his boss. But that they were opening another venue in town.
If they did open in Chorlton I think they'd do very well, it's the sort of casual dining that everybody loves, and we currently don't have a quality burger place round our way. So we're hoping….

Follow @Bacononthebeech
Posted by Bacon on the Beech at 08:30