I consider myself a bit of an aficionado on tapas. I've travelled extensively in Spain, I have friends there, and my heart really lies in that great country, plus Mrs Bacon spent many happy childhood holidays in Calpe, Costa Blanca.
So several years ago when a Tapas Bar opened up on Beech road, we were over the moon. Unfortunately Lorenzo's tapas bar was not to last, it seems he upset too many neighbours, and sadly his wife Inmaculada who made the food had long since gone.
However the phoenix rose from the flames into Bar San Juan, with one of Lorenzo's old waiters Juan stepping in and running the show. Since then, it's gone from strength to strength. Whenever I pop out to the local corner shop, it always appears to be busier than everywhere else. 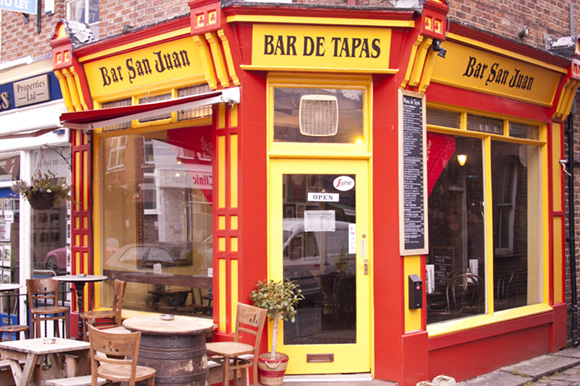 British people have really embraced tapas haven't they? It seems that it matches how people want to go out and eat now. I'm surprise nobody in Chorlton has opened up an Italian tapas bar like Polpo or Bocca di Lupo (in London) if they did, they would simply be raking in the money. (But no, we get another same old average inspiration free Italian.)  If I had the capital I'd do it myself.
Despite being only 2 mins from Bacon towers, we haven't actually been to Bar San Juan since the summer, when me and Mrs Bacon sat in the hot sun one Friday afternoon protectively bagsying our seats (one of the barrels) until it opened at 5pm.  Then we could pretend we were in Spain and drink cold beer and eat tapas outside, texting our friends until they'd all finished work to join us. We always enjoyed it, but comparing it to Spanish tapas bars, the food was fairly average. The tapas were ok, all the usual suspects were there, but with a few exceptions it didn't really excite us that much. 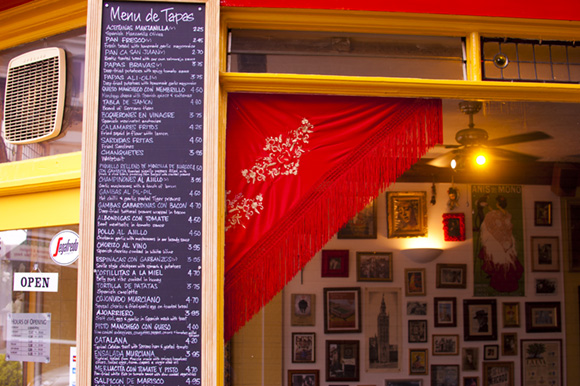 I thought it was about time I reviewed it anyway, I am Bacon-on-beech-road after all.
They're open from midday now in the week (until midnight) a really good move as Beech road is busier than you'd expect in the daytime. When I was in, three other tables started filling up.
Straight away I could see that things had moved on since my last visit just by looking at the menu. I ordered the Montadito de Morcilla de Burgos. (Black pudding and chilli with cocktail prawns on toast - £4.50) It was excellent, I always prefer Spanish black pudding anyway, the rice adds an improved texture, and in this case the heat from the chilli was a really good combination.


My old favourite Albondigas con tomate (Meatballs in tomato sauce - £4.50) didn't disappoint either, unlike other inferior tapas bars that buy all their food from a central supplier, you could tell this was home made.

I also tried Queso frito confitura de tomate (fried cheese with home made tomato sauce - £4.50) You can't go wrong with those two words; fried and cheese for me, even so, I think these would have gone down better after a few more beers.

Neither could I resist the Cojonudo Murciano Sobrasada (Chorizo spread & fried quails eggs) served on toast. We've had this dish before, but I think they've improved it of late. And the portions are generous, unusual in Britain. The spicy chorizo spread makes a lovely bed fellow with the fried quails egg.

It's always nice to see dishes that you wouldn't normally see in your average tapas bar in the UK, Pimientos de Padrón (like a Spanish pepper lottery - you never know when you'll get a hot one) & Belly Pork ribs cooked in honey, plus on this occasion a special of one of my real favourites when in Spain; Croquetas. I'll have to try them next time. The Tortilla on a neighbouring table looked good and proper home made. (I seem to remember it being good from the Summer.) 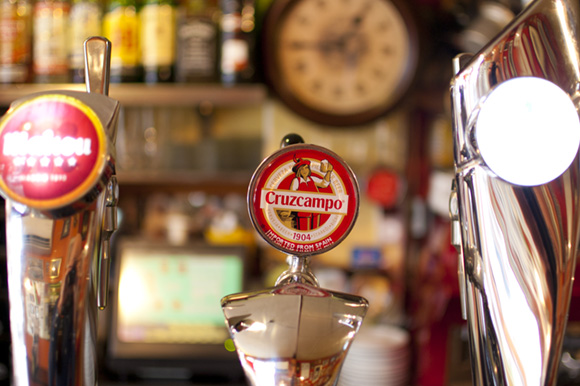 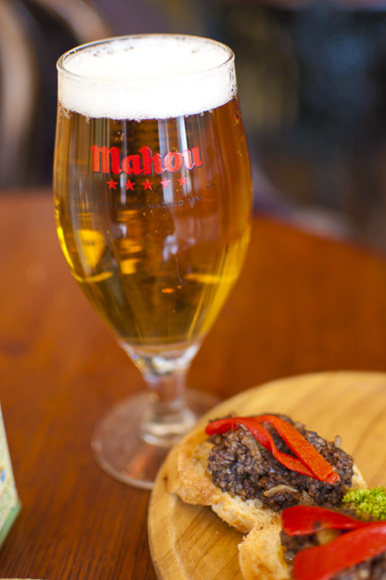 They've extended the beer range as well since my last visit, as well as my first choice Cruzcampo, they have Mahou, the beer everybody drinks in Madrid, San Miguel and Alhambra.
The bottled beers selection has also been improved and I counted 10 red wines, and 6 white, sangria on tap, 2 cavas & 3 Spanish brandies (including Torres 10) plus 3 sherries.

I just couldn't resist ordering one last tapas (that's how it always works with me, I always have to order one more.) Connoisseurs of Jamón Ibérico will know the best comes from Salamanca, so the 12 month old Jamon de Salamanca had to be mine (£4.95) It was superb, so delicate, tender creamy and soft, a real delicacy. As with all meat, it's the fat that gives it the exquisite flavour. 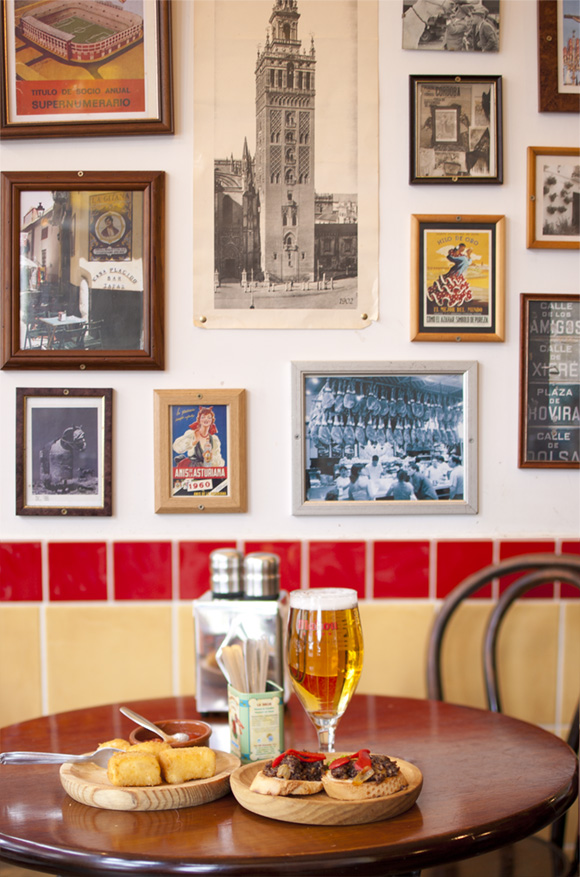 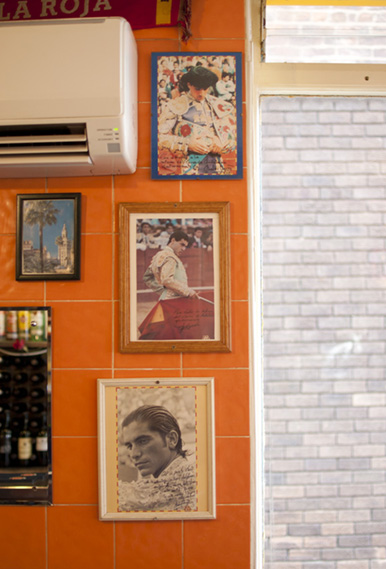 I really enjoyed my lunch at bar San Juan, it has the air of authenticity about it, it's decorated like an Andalucian tapas bar, (nice to see the little TV on in the corner) and the food is now a step above the boring lazy tapas bars which litter the high street in the UK, plus all the staff are Spanish which seems to be part of the whole experience.
I left with a few take away boxes to take home for Mrs Bacon to put me in her good books, and she was equally as impressed.
The food at Bar San Juan has definitely improved in leaps and bounds since my last visit, from an average local tapas bar they've upped their game to become a place I'll definitely be frequenting more often.

Price: About £30 for a generous lunch for 2, including 3 halves of beer.
You could easily have just two tapas for about £10 for a smaller lunch.
Service: Very friendly.
Atmosphere: Typically Spanish. They've created a nice ambience and it feels authentic.
Food: Better than your average UK tapas bar.
Star dish: Montadito de Morcilla de Burgos.

Follow @Bacononthebeech
Posted by Bacon on the Beech at 20:04