Meeting up with a few friends one drizzly Saturday afternoon just before Christmas, we started off in the Port Street Beer House tucked away behind Piccadilly. It doesn't look much from the outside, but it's a beer lovers mecca. It was also the scene of my first £5 pint (the wonderful German Wheat beer Schneider Weisse) 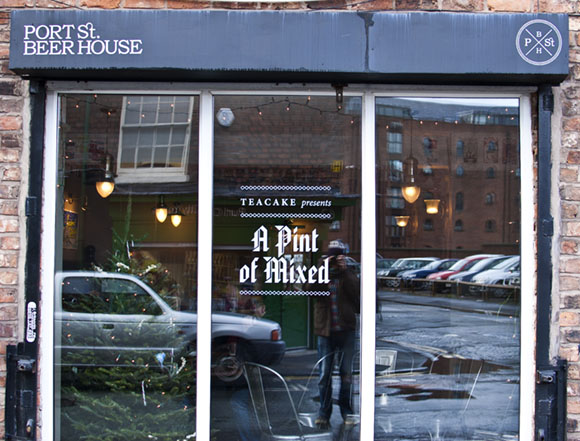 But I have forgiven it for that, as this place is so good.  I was meeting Mark, Neil and Dave in here, all lovers of beer, cycling and photography, in that order. And all over forty, which was pretty much the demographic of this pub on our visit. There's so much choice that there's actually an extensive beer menu. 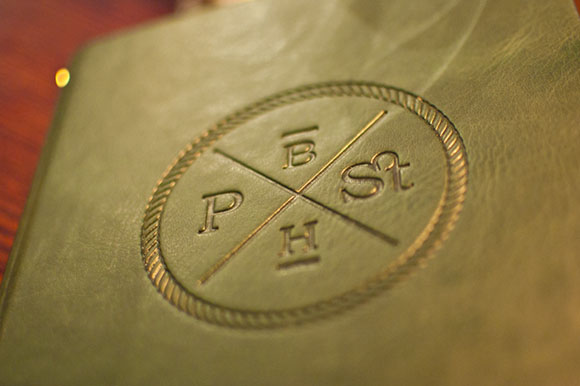 They stock a lot of foreign and American craft beers, but they are quite expensive, so we all settled on one of the several cask ales which are average price for the city centre. I had So-Hoppy a lovely light fruity pale ale, I also sampled Black-edge stout, which was rated as very good, and Red Willow Shameless from a keg. 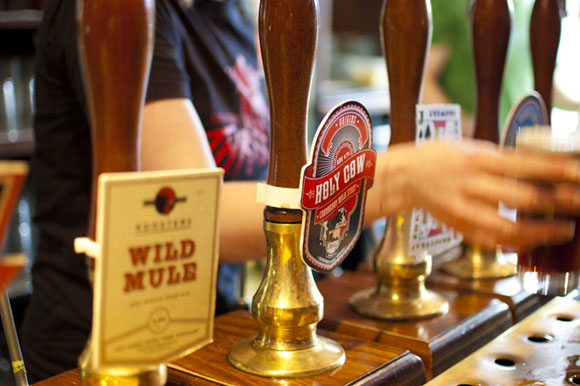 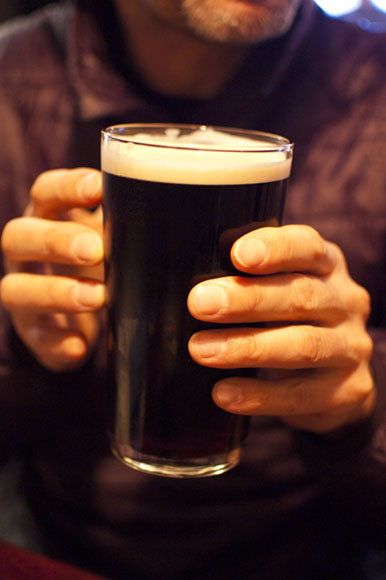 There's a lot of debate in CAMRA circles about the emergence of craft keg beer. This beer answers all of those questions about quality, as it tastes so good, I could care less about how it's been dispensed. It's a superb floral tropical strong pale ale. This new brewery can do no wrong in my eyes. Is Redwillow the best new brewery in the country? I think so. I'd take it any day over the likes of older breweries like Robinsons, Holts, Green King, Hydes etc. 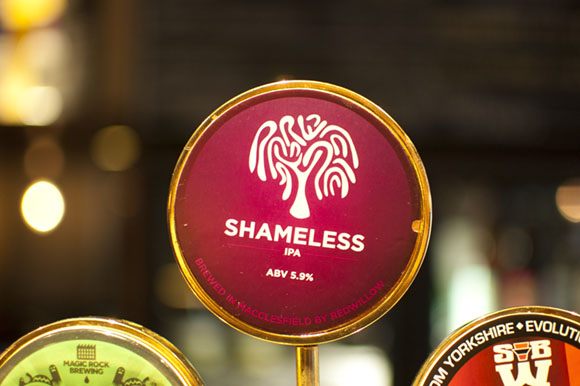 Next we went down to The Castle on Oldham street. A superb example of a Victorian tiled old fashioned boozer. It was very busy with an eclectic mixed crowd,  we bagged the last table in the back room. 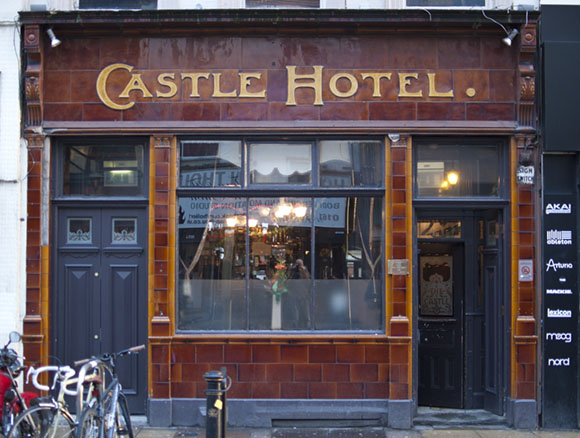 I have to say none of us were that into the beers we ordered. I had a pint of Unicorn Double Hop, a bland uniform session ale. I'm not a massive fan of Robinsons anyway. What it lost in beer though, it made up for in atmosphere, it felt a bit like a quirky London pub like The French House on Dean street in Soho.

We then wandered down to Fringe Bar on Swan Street, another quirky and very busy Belgian style pub. We're all fans of this place. 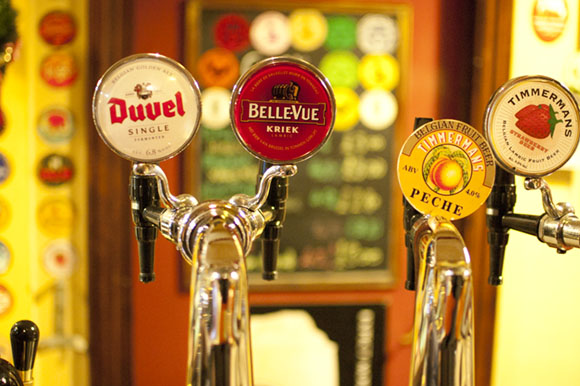 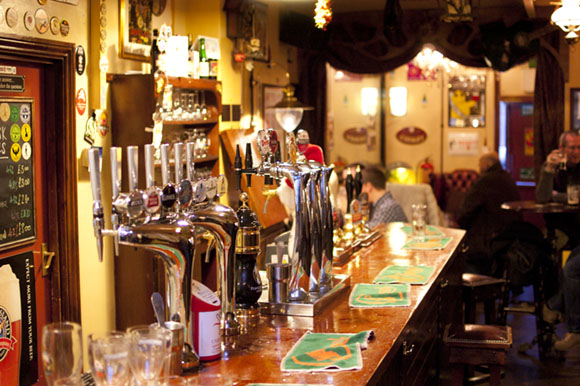 I couldn't decide what to order, it was going to be a long afternoon so I couldn't get a strong Belgian beer at this stage, it was too early. I settled on a half of Bah Humbug from Wychwood, which was ok.
Onto The Marble Bar at 57 Thomas Street. It's a strange set up with one long table taking up all the room in this tiny place. The others all had a pint of Best, I had a half of Decadence, a fantastic 8% Imperial Russian stout. The staff here were the friendliest we encountered all night. I also picked up a bottle of St. Feuillien Christmas beer, as they have an excellent foreign range. 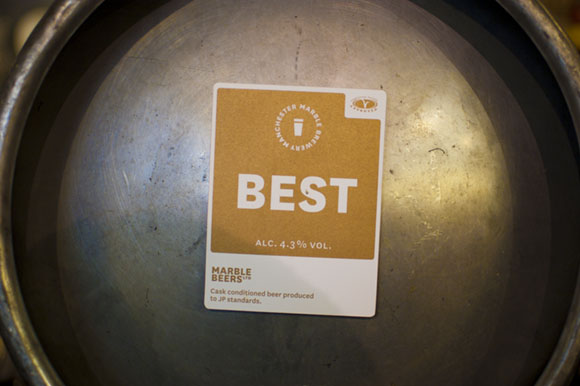 Then we went off piste and had a look at Cord bar which was rejected as looking too 'trendy' then to Odd bar which was too busy with no seats, neither did we like the The Bay Horse which felt like a hotel bar, and we couldn't see any cask (though they apparently serve it) so we stumbled into a new one on me, Terrace on Thomas street.
It was early evening now, and it was getting even busier. It looks like a buzzing London cocktail bar, with lovely subdued lighting and disco music playing, but it had some great cask beers on, such as Thornbridge Jaipur, which we all love, but rejected as too strong at this point. So we all favoured a pint of Dark Star Hop head. A debate on the merits or lack of disco music ensued (I'm a fan, Neil hates it as it seems he was scarred by it from an early age) as they played 'Young hearts run free' by Candi Staton.

Well none of us are young any more,  but we certainly gave The Northern Quarter pubs a good go.
It was time to eat our much discussed Christmas dinner burgers at nearby Solita (I'll review the restaurant separately.) We all had a pint of Hornbeam Top Hop which was good but too cold. Neil left at this point, as we finally returned to the Port Street Beer House to finish our night off. 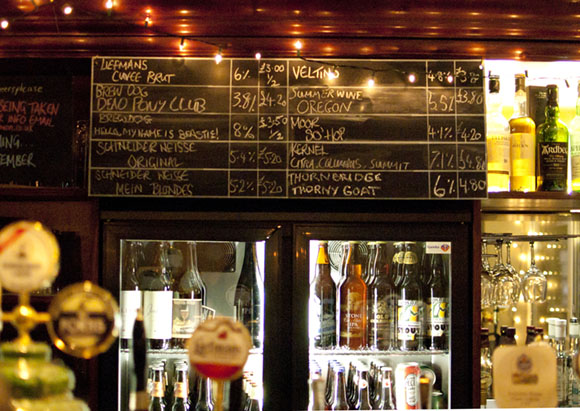 At this stage of the evening, it was getting very busy indeed, there were very few seats,  downstairs or upstairs. I couldn't resist another half of the Red Willow Shameless, a perfect way to end the night.
You could do so many variations on this trail, and extend it by going up to The Marble Arch and The Angel on Rochdale road.
Indeed, I can't think of a much better way to spend an afternoon.


Follow @Bacononthebeech
Posted by Bacon on the Beech at 11:32