It's always been a mystery in Chorlton. How come we have such brilliant produce shops; Frosts the butchers, Out of the Blue fishmongers, Barbakan deli (plus Hickson & Black's & Ludo) and Unicorn, but can't sustain a decent restaurant? Ostara came and went, apparently Chorltonites don't want to pay £15 for a main course according to Lee Janda the owner of the now defunct restaurant. The chef opened his own successful place The Rose Garden proving what we already know; that those living in Didsbury will definitely pay a bit more for better quality. But is it actually true of people living in here?
I think we will find out with the opening of The Beagle in the old Ostara location.
Over the summer, we were having a chat with one of the owners of parent restaurant Aumbry in Prestwich (Manchester's best restaurant in my opinion) about our poor showing of decent places to eat in Chorlton, and she said that they were looking at locations. When it finally happened I have to admit I was slightly disappointed it was not higher end food, but still, it looked promising.
The building itself is a strange set up, it doesn't really work that well as a space, especially the rather large bar area at the front, but we sat at the back up the stairs, which they have done as well as they could do with what they have. The branding is successful with the dog logo on everything from the wall as you enter, to the beer glasses. 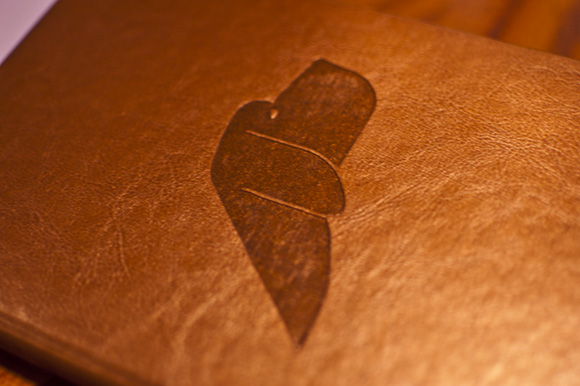 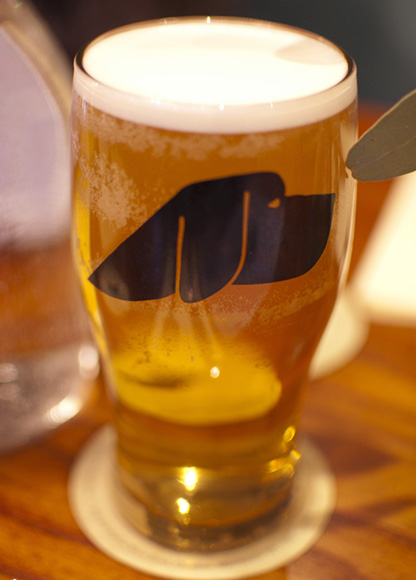 The beer selection is really excellent, but you'd expect nothing less from the owners of the Port street beer house in the city centre. Last time we just came for a drink I had The Beagle Pale made especially for them from the Summerwine brewery in Holmfirth - a new one on me, but lovely.
This time I couldn't resist a beer from Thornbridge surely one of the best breweries in the country. This one was called Brother Rabbit, it was absolutely superb. 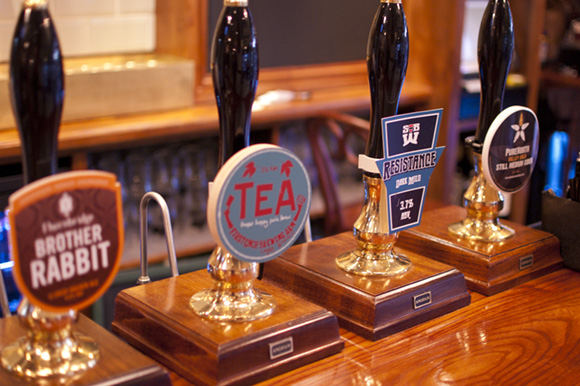 I took my Mum and Dad who were over for some Christmas shopping as well as my Mrs Bacon, so it would be a good litmus test, would they enjoy it as much as we hopefully would? I was looking forward to the bread and dripping, we had so enjoyed it at Aumbry and it was just as good, like Sunday dinner in golden liquid form. The bread was decent too. 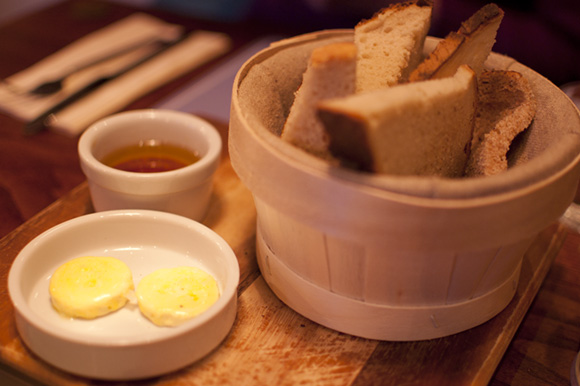 For starters, we had the Pearl Barley Kedgeree which was lovely, really nice texture and flavour. My Wife described it as sumptuous and didn't really want to pass it over! Also the Salt Beef Stovey with a fried duck egg on top, it looked beautiful and tasted superb. Next time though I'll be ordering the Derbyshire Oatcakes, the small amount my dad was able to spare was tasty.


For mains, they did not have the Pork Ribs & Belly until later that evening, I was gutted, but went for The 30 Day Aged Rump Cap Steak. Well I don't know about anybody else, but I am very happy to pay £18.50 for meat when it is this good. It's the best steak I've had in Manchester, well seasoned and rare with perfect chips.

The Colonial Goose; Chump of Cumbrian Lamb. was equally as impressive, pink, melt in the mouth, and very 'lamby' as Mrs Bacon says!
The Hay Smoked Wester Ross Salmon my dad ordered tasted almost sushi standard, and I'll wager it was from Out of the Blue, a great piece of fish. Mum was very pleased with her Goosnargh Chicken, which we wouldn't usually order so were pleased to try it. Another well balanced dish, it was juicy and moist.

The only misfire for dessert was the Sussex Pond Pudding, a little too heavy and too tart. For me the overly citrus flavour didn't sit well with the dense suet pastry. Mrs Bacon declared the treacle tart the best she's ever tasted, and she's some expert believe me. Dad couldn't spare any of his Apple Pie & Custard, so we know he enjoyed it. I'd probably go for the Mango Fool next time, but with the Earl Grey Ice Cream, which I could have eaten on it's own, with a very large spoon. (I think this ice cream recipe may well have come directly from Heston Blumenthal, as Mrs Aumbry worked at The Fat Duck, if this is true, we are honoured in Chorlton!) 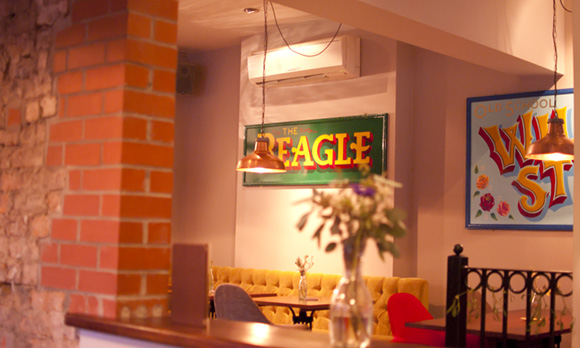 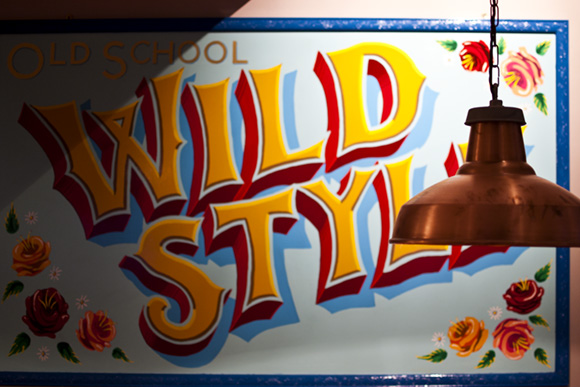 Some more photos of the interior. I really liked the small touches, the classic French Duralex water glasses I remember from my childhood, the blackboard with the beer list on it, and the extra hand pumps on the wall behind the bar. 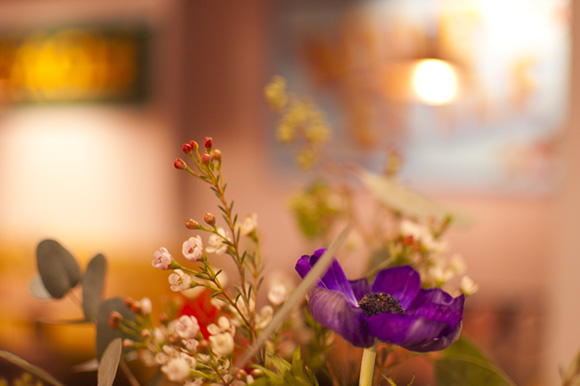 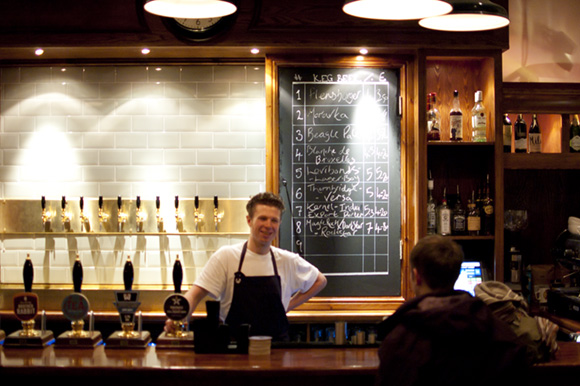 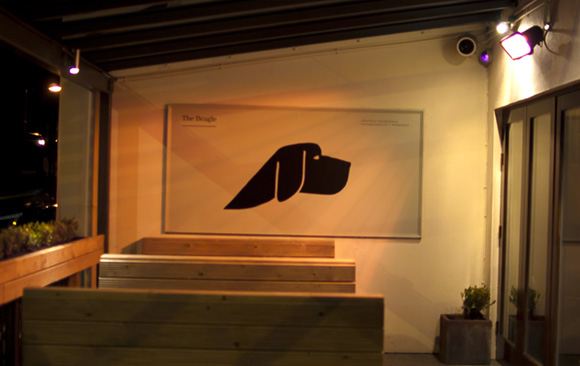 All in all we decided we all loved it at The Beagle.
Mum and Dad probably wouldn't normally pay quite as much as this. The bill came to £134.80 for 4 including 2 and a half pints and a few soft drinks. But they thought it was worth it for the quality you get.
I'm sure The Beagle will do well in Chorlton.
It's way ahead of the competition if this meal was anything to go by, and the people round here deserve it.

Price: In the week, they currently have an offer of 2 beers, 2 courses and a side for £20 which is great value.
Service: Very friendly.
Atmosphere: Good
Food: Best in Chorlton.
Star dish: Pearl Barley Kedgeree

Follow @Bacononthebeech
Posted by Bacon on the Beech at 10:31