We'd been on a Northern Quarter pub crawl for a few hours.
I'd been drinking halves, so didn't feel too drunk, but I doubt I'd have been able to operate heavy machinery.  I knew just what was in order, The Christmas Burger at nearby Solita I'd read about in the excellent Foodgeek blog.
I explained the concept of the food at Solita, to my 3 friends.
"You know, it's like the food you get on 'Diners, Drive-ins and Dives'.
They looked at me blankly.
"You know, it's on the Food Network all the time" I said. "
"What's the Food Network" they said.
Feeling I was losing the crowd,  "They do a Christmas dinner in burger form" I explained.
They seemed to like that idea.
So we passed the queue for Almost Famous Burgers (I'm a fan, but at this stage of the evening they wouldn't have put up with waiting around in the queue in the cold for at least half an hour, and I'm not sure they'd have appreciated the studied 'coolness')
I've actually been to Solita before.  I enjoyed it, but wasn't as overwhelmed as other reviewers had been. We didn't actually rate the hanger steak much, (it was a bit chewy) the burger was good, but I felt I wanted the portions more like the ones you see on Triple D. The star of the show was the much lauded pulled pork sundae, this is great fun, the pork warm and comforting, with creamy mash, and I love the crackling on top.

I managed to persuade my friend Dave to order this, and I had to have it again of course. It didn't disappoint either of us.
We were sat on the tall stools on one side which work well socially. The bar area is really nice, but I don't like the other chairs and tables, they maybe expensive, but remind me of a 'posh' Indian restaurant.
This place is really crying out for booths on one wall. I'm not sure they have room though, but I'd like to see it a bit more like an American Diner (not too tackily themed like Ed's Easy Diner in London though, as this place is obviously a lot cooler than that.) 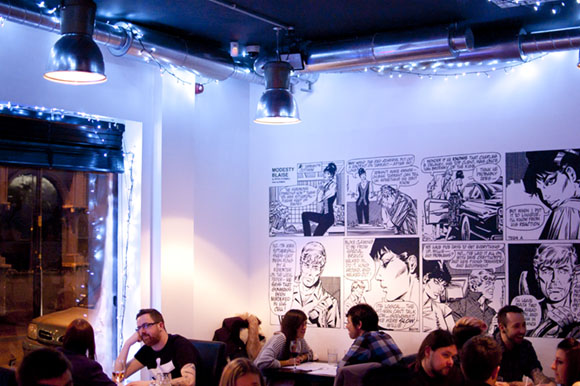 We all had the Christmas burger. Which was a venison patty, fried turkey, sage and onion hash brown, purple sprout tops, spiced cranberry salsa, topped with sliced chestnuts.
It came with fantastic thin and crispy fries all like the bits you get at the bottom from a chippy. Also shoestring parsnips which were super thin & crispy.

I was starving and really looking forward to this. 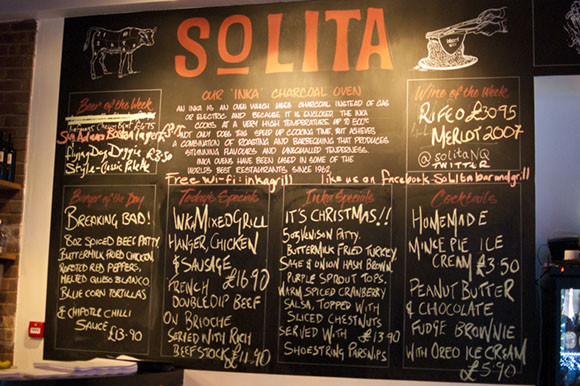 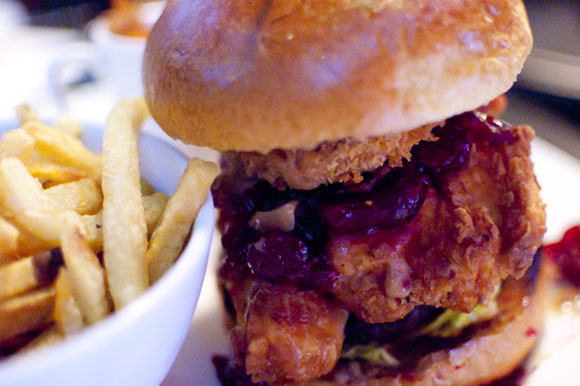 To be honest, I was a little disappointed. I'm not sure what it was.  It was a bit dry, probably from the hash brown, and battered turkey, there was cranberry sauce to compensate, but I wanted to ask them, "has tha' got nowt moist?" (I like a lot of gravy with my roast dinner!)
It was good, it just wasn't great, and I regretted not ordering a standard burger.

That's pretty much my opinion of Solita, I read other reviews about it and somehow expect it to be better that it actually is.  Maybe I've just got high expectations.
I would definitely return to Solita if I was in the area and want a decent burger and would probably order the Pulled Pork Sundae again, and maybe some rooster scratchings which I enjoyed on my last visit.  But I'm yet to try the likes of Gorilla &  Southern 11 and Mud Crab Cafe in Didsbury all serving similar style food.  So I'm not in a rush to return for a while.

Follow @Bacononthebeech
Posted by Bacon on the Beech at 13:23