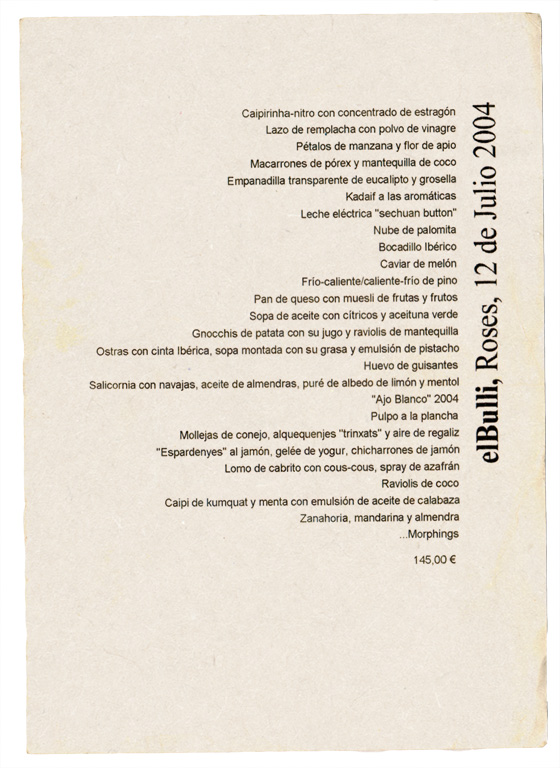 In July 2004, me and Mrs Bacon ate at the "best restaurant in the world."
But here's the thing; I wasn't prepared for it in any way.
First of all I'd never eaten in a Michelin star restaurant before, and certainly not anything remotely like it in terms of molecular gastronomy.
We were due to honeymoon on the beautiful unspoilt coast of the Costa Brava the following year, and I'd probably read a newspaper article that had intrigued me, as El Bulli was only about an hours drive up the coast near to the town of Rosas on the border of France and Spain.
I had no idea how hard it was to get in, but in October, both me and a friend of mine tried to get a table the following summer. I soon got a reply:

"Apreciados Señores, It is impossible for us to attend reservations for next year at this moment because there are a lot of demands for 2003 and this management is taking us all the time. Normally we start on January 15th but if you contact us again in October we will try to explain you or decision due that is possible that we change our system. We hope you accept our apologies.  Atentamente  Luis García"
I forgot all about it.
A month passed, then one day I got an email from my friend that read " read it and weep!"
He had only managed to secure a booking!
Quite quickly, I emailed the restaurant again, thinking that as he'd just managed to get a table, then maybe we could. I mentioned our honeymoon, hoping that this may help.
I got a reply:

"If you like we can make your dinner reservation on Monday July 12th of 2004 for 2 people at 8.00 p.m under the name..... Atentamente  Luis García"
We were in.
My friend cancelled his booking as his wife wanted to holiday somewhere more exotic than Spain that year.
The day we ate at El Bulli I made a huge mistake. I ate too much lunch, too late. I had no idea what lay ahead. We were lazing by the pool in the mid afternoon and I was greedily stuffing my face with jamon and chorizo and juicy Spanish green olives.
We travelled up to the industrial town of Rosas in the late afternoon . We drove out of town up the windy road right up to the restaurant early to see where it was. It didn't look particularly grand. It was just like a normal family Spanish restaurant from the outside.

Though it was pretty, nestling in a little valley looking out to sea. Down below, there was also a holiday camp with log cabins dotted around manicured gardens. We tried to rent one for the night. We had a look inside one and my wife made the executive decision that it was a bit musty and tired and not where we should be staying. We drove back to town and got an average mid range hotel on a hill on the outskirts of town. Later that night, we taxi'd up the windy coastal road again.

It was so exciting to be sat there, everything ahead of us. We were given the wine list. It was the size of a yellow pages. Of course I started looking for the second cheapest on there. I decided to narrow it down to riojas. I asked the sommelier - red or white riojas he queried? Naively, and rather stupidly, at that point it hadn't occurred to me that you could actually get white riojas! The red that I eventually ordered for about €20 wasn't available, they bought a replacement which was delicious. Except they only ever poured tiny amounts of it for you and then removed it. You took another sip, and they came back to replenish. I had no experience of this and found it irritating. Amusingly, a waiter spilt a tiny amount on the tablecloth, and apologizing profusely he solemnly placed a tiny square hanker-chief clearly designed for this awful eventuality that we may be offended at the horrendous stain.
What followed is a bit hazy, and we didn't photograph our experience.
But I have found photos of every course, courtesy of Ricard Giner.
It's worth noting, that unlike The Fat Duck, these dishes were only for 2004, every year was a totally different menu!

We also remember this, an inside out sandwich
The next course, we remember very well, it looked exactly like caviar in the little tin but it had the most beautifully fresh melon flavour which had been individually injected inside each ball. Unbelievable!


The description of the next course comes from Ricard Giner who dined there the following evening :
"This dish was pure genius. Half the glass was frozen. They put warm water in it, with a single pine needle. It was both hot and cold on the tongue, a completely baffling paradox, and had a touch of the pine forest to it."
We also remember this, as we love standard Ajoblanco, but this of course was El Bulli style:


The most memorable was what we called cheesy snow; but what was actually called Frozen Puffed up Cheesecake. It came in a foam polystyrene take-away type box. When you opened it, what was inside was snow. It was cold like snow, it looked like snow, but it tasted of the cheesiest cheese you've ever eaten. I devoured the lot. It was to be my downfall.
What followed was a blur, balloons that you had to inhale pine air (so knowingly pretentious) a wonderfully inventive egg made of green peas, potato gnocci, rabbit, etc etc. I remember about 3/4 of the way through being so full, I felt nauseous, it was all too much. Embarrassingly, and to my shame, there were a few courses where I could only eat a mouthful. I just couldn't be sick in the world's best restaurant!

I remember this, Potato Gnocchi with butter ravioli, as I'd never eaten Gnocci before at that point.


Also a new one on us then was Samphire grass; almond oil, lemon pith and menthol.

This next course was another one that stuck in our minds; Green Egg & Ham Foam as the egg 'yoke' was in fact green pea liquid injected inside it, another mind blower.

It's worth noting that in these dishes, that Ferran Adrià invented the foam you see in all high end restaurants now (too much if you ask me.) He got the idea from a smoothie drink he was finishing. Also it was actually our first taste of rabbit. Mrs Bacon didn't actually like it and I could barely finish it, I was so full on the cheesy snow!


But we'd done it. We'd eaten at the "best restaurant in the world". My tiny mind was blown, things would never be the same again. Of course, we've bored everyone silly about this experience, (and 'accidentally' dropped it into the conversation with people we've just met.) But we have created a myth in our minds up to some extent, in reality, some of it at that time was just too way out for me. It was like taking up jogging, and then being entered into The New York Marathon.
As Cher says, "If I could turn back time......

We didn't eat in a Michelin star restaurant again for a few years when we went over to Juniper (it was a massive disappointment in comparison.)


If you have any doubts about the genius of Ferran Adrià  watch 'No reservations' on the last ever El Bulli meal.  Initially suspicious, chef and writer Anthony Bourdain totally changed his mind about Adrià after eating at El Bulli. It shut it's doors finally in 2011.
No Reservations: El Bulli.

All photos courtesy of Ricard Giner.

Follow @Bacononthebeech
Posted by Bacon on the Beech at 10:37