Most people in Manchester know about Frosts butchers a superb shop and supplier to most of Manchester's best restaurants. But there is another butchers in Chorlton,
J. Robinson.
It's an old fashioned place in the best sense of the word. I always enjoy a trip there, it really is like shops used to be. There's often a queue of regulars on a Saturday. What is it about butchers that they always seem so cheery?
They probably have a narrower range of products than Frosts, but they know what their customer wants. We always go in for the same thing. The roast ham that they make on the premises. It the best British ham I've ever tasted. What makes it so special is the fat. Fat seems to be a dirty word in the consumers mind when buying meat. They equate fat with being fat. 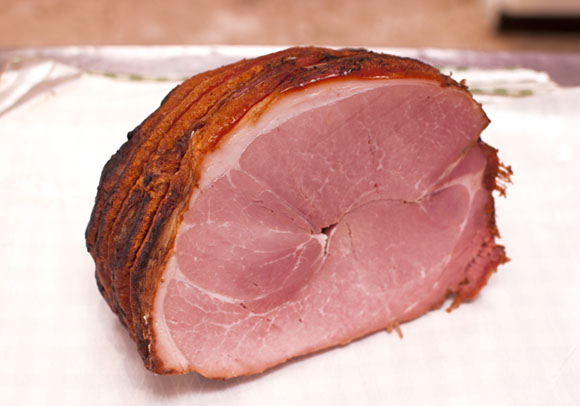 There is no special ingredients, just quality meat roasted. Using granary bread from Richardson's bakery on Beech road, and this ham, proper butter & maybe a touch of mustard, you have the best ham butty you're likely to eat. There's only one problem with this ham. Once you've eaten it, you're unable to go back to water injected tasteless supermarket stuff ever again.


Robinson's also fairly recently started stocking Andrew Jones Pies.
They do a pork pie that has cheese baked onto the crust.
I've not eaten a better pork pie either.


They also sell a figit pork pie, but the cheese one is so good, I've not managed to order one yet.
Andrew Jones also supply Heston Blumenthal at his Bray restaurant, and recently appeared on 'Fantastical Food " for Channel 4.
If their pies are good enough for Heston, they're good enough for me.

Follow @Bacononthebeech
Posted by Bacon on the Beech at 12:19